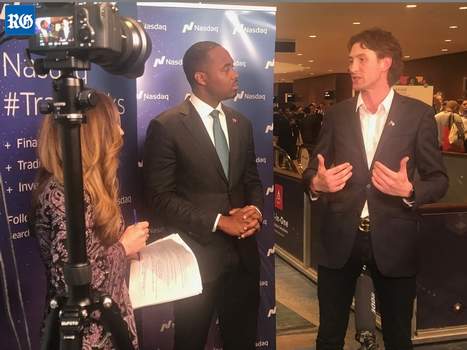 A 20-strong delegation from Bermuda has been in New York City promoting the island’s pioneering work to regulate the global blockchain industry.

David Burt has been at the forefront of the efforts. As he ended two days of activities in the city, The Royal Gazette asked the Premier how he would measure whether it had been a worthwhile endeavour.

“We measure the success when the companies, like today, provide employment for Bermuda and investment. That’s the proof of the pudding,” he said.

Mr Burt was referring to Shyft, a company involved in blockchain technology. A few hours earlier it had signed a Memorandum of Understanding with the Bermuda Government. The MOU included a pledge to invest up to $10 million in the island over a three-year period, creating new jobs, helping to re-skill workers and investing in local businesses, education and infrastructure.

The island’s contingent in New York comprised members of the Bermuda Government, the Bermuda Monetary Authority, the Bermuda Business Development Agency, and industry, including several Bermuda law firms. Wayne Caines, Minister of National Security, who has a key role in the island’s blockchain initiatives, was also part of the delegation.

New York is celebrating “Blockchain Week”, and Mr Burt spoke at the three-day Consensus 2018, which attracts 8,000 attendees it is one of the world’s largest cryptocurrency conferences. He also spoke at the separate Ethereal event, and gave interviews to BBC Online, Bitcoin Magazine, Coindesk Nasdaq and Bloomberg Radio.

At the Consensus event, Bermuda had a suite where it could meet with individuals, companies and organisations interested in learning more about what Bermuda was doing and what it could offer.

Mr Burt said the suite was “flooded” with interested parties, including companies that said they had planned to set up business elsewhere, but had now changed their plans after learning more about Bermuda.

Mr Burt said: “A year ago Bermuda was not even in this space. Now we are pushing for the leadership.”

He said it was about far more than cryptocurrency, with blockchain breakthroughs set to solve problems and make people’s lives easier.

For example, Shyft has signed a separate MOU with Bermuda-headquartered Trunomi, which aims to leverage Shyft’s blockchain technology with its expertise in consumer consent frameworks to support Bermuda in the implementation of an electronic ID framework.

At Consensus, Don Tapscott, the keynote speaker, author, and executive director of the Blockchain Research Institute, said: “The Government of Bermuda — all the way up to the Premier himself — is showing remarkable leadership in the blockchain space.

“Bermuda is attempting to figure out an environment that enables both an innovation economy and entrepreneurship, on the one hand, and protecting the interests of consumers and investors on the other. Our institute intends to collaborate much more closely with Bermuda in the future.”

Sean Moran, the BDA’s Head of Business Development, said: “It’s impressive to see the volume of people who have come through our meeting suite. It has been non-stop. I’ve talked to dozens of groups that want to launch their ICOs out of Bermuda; they want to establish service-provider companies in Bermuda that would help support the growth of our digital asset industry.”

Mr Burt said success could be measured by companies committing to bring jobs to Bermuda and providing investment to the community.

Describing his time in New York as “hectic”, he said: “The fact is Bermuda had to catch up and we have caught up. This is not the beginning of the end, this is the end of the beginning. We still have regulations to put in place. This is part of a wider strategy.”

Norton Rose Fulbright Partner Mina Matin, who previously worked in Bermuda, said: “We learnt first-hand about the island’s new legislative and regulatory framework for digital assets, and we really hope this event will encourage premiere businesses to move to Bermuda through our global network.”

Joseph Lubin, co-founder of cryptocurrency Ethereum and founder of blockchain giant ConsenSys, who was also at the conference, said: “It’s great to see Bermuda’s presence at this conference, and even greater to see the activity you’ve put into understanding the cryptocurrency space, the blockchain space, and into moving forward aggressively to write legislation and enable companies like us to come to Bermuda and build businesses there.”

Craig Swan, managing director, supervision (insurance) at the BMA said the Authority had studied blockchain and virtual currencies and come up with legislation its believes addresses many issues. He said: “We’re seeing that clarity is an attraction to many who realise they need to be in a well-regulated jurisdiction with credibility to transition to the mainstream. The new legislation serves to provide that.”

•This story has been amended to show that Mr Burt participated in two days of activities in New York and not five.