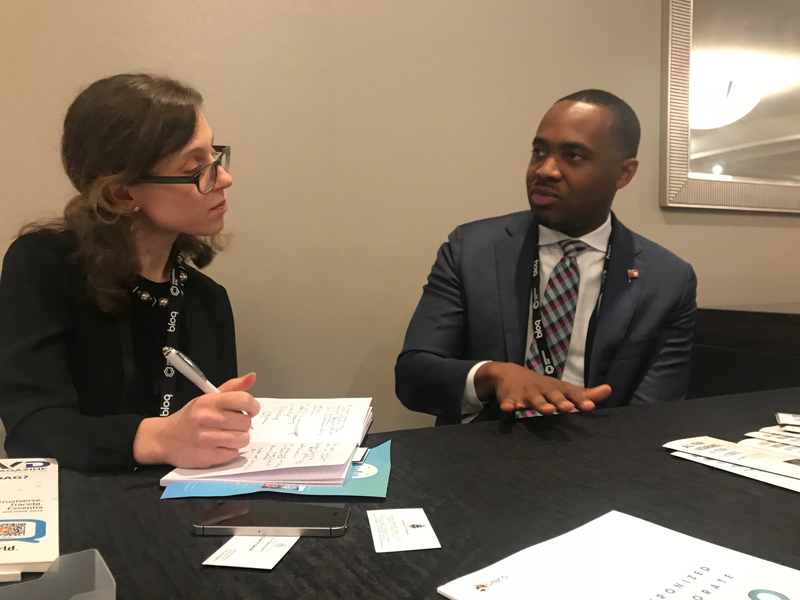 Premier and Finance Minister David Burt, accompanied by National Security Minister Wayne Caines, led a 20-strong delegation from Bermuda to Consensus 2018, a three-day midtown conference running May 14–16 that has attracted more than to 8,000 delegates encompassing a wide array of industries and government entities. 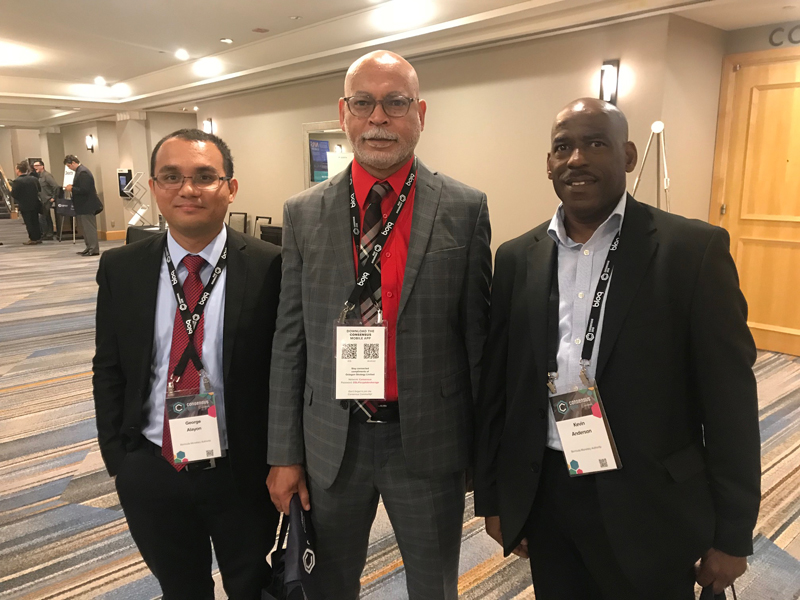 “It’s gratifying to go to an event like the one today, when people already know what’s going on in Bermuda,” said the Premier, who also sat down with BBC Online, Bitcoin Magazine, and Coindesk, a news site specialising in virtual currencies which also organises Consensus.

“People we’ve met want to find out more about what we’re doing, how we’re moving forward. We certainly have a story to tell—and a very good one.” 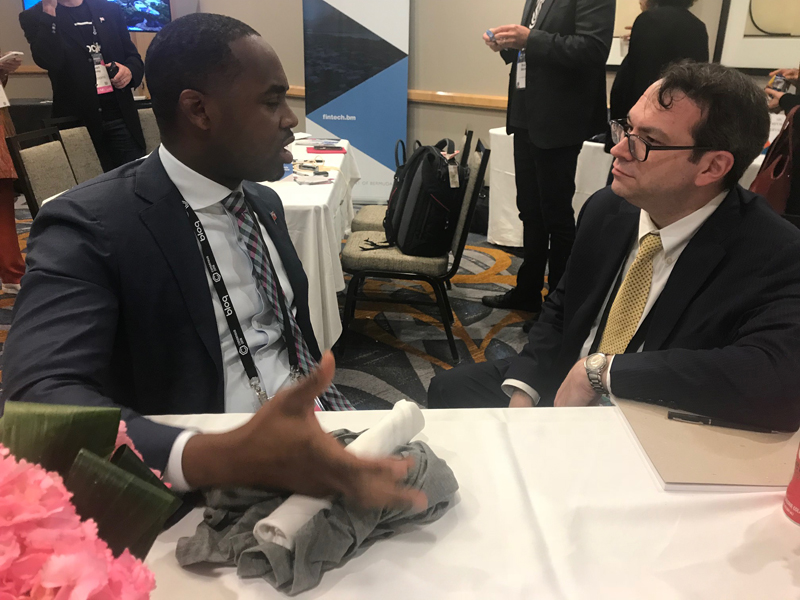 The BDA said, “The Premier addressed a full auditorium of attendees before a midday panel on regulation, highlighting the island’s quick progress to become a global hub for fintech enterprises and innovation through ground-breaking recent legislation to govern regulation of digital assets.”

“The government of Bermuda—all the way up to the Premier himself—is showing remarkable leadership in the blockchain space,” keynote speaker, author, and Executive Director of the Blockchain Research Institute Don Tapscott said afterwards. 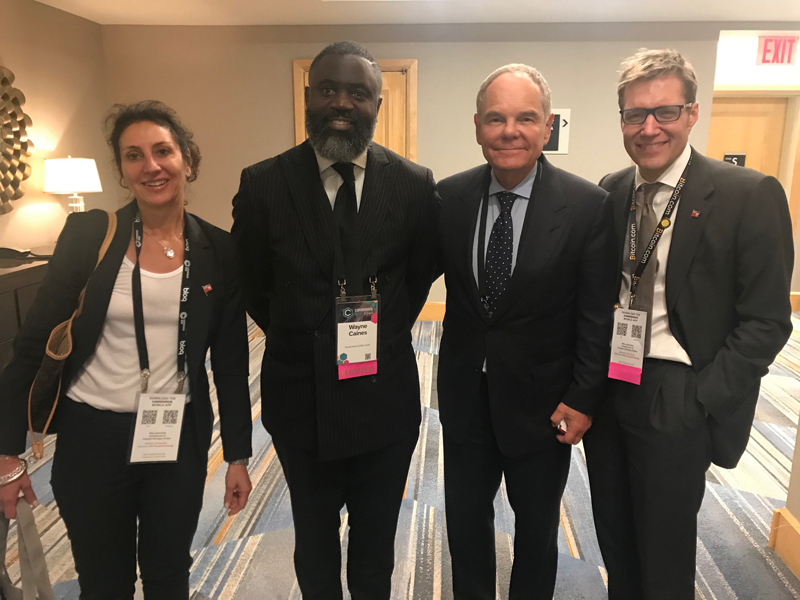 “Bermuda is attempting to figure out an environment that enables both an innovation economy and entrepreneurship, on the one hand, and protecting the interests of consumers and investors on the other. Our institute intends to collaborate much more closely with Bermuda in the future,” said Tapscott, a leading authority on the impact of technology on business and society. 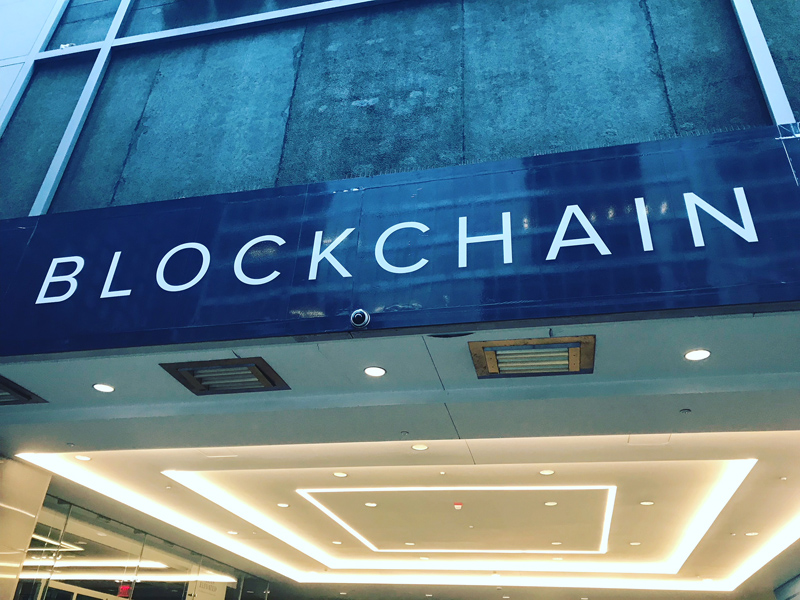 Bermuda delegates were deluged throughout the day by inquiries on setting up businesses and launching initial coin offerings from the island.

Meetings were held in a Bermuda suite, where a networking reception also attracted entrepreneurs and technologists looking to leverage the island’s respected regulatory environment and sophisticated infrastructure. 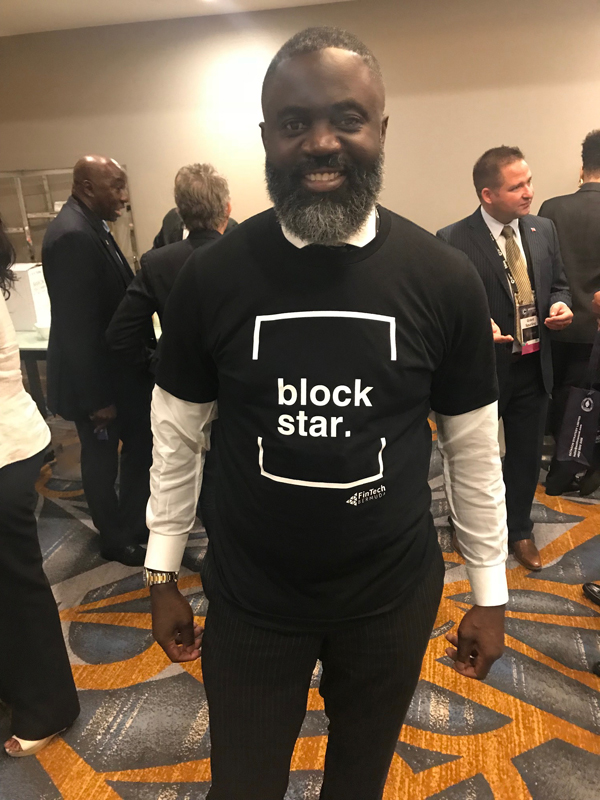 “It’s impressive to see the volume of people who have come through our meeting suite—since the speech, it has been non-stop,” said the BDA’s Head of Business Development Sean Moran.

“I’ve talked to dozens of groups that want to launch their ICOs out of Bermuda, they want to establish service provider companies in Bermuda that would help support the growth of our digital asset industry.

“Everyone is excited by what they view to be a jurisdiction that would offer a positive and welcoming environment for new businesses in the blockchain space.” 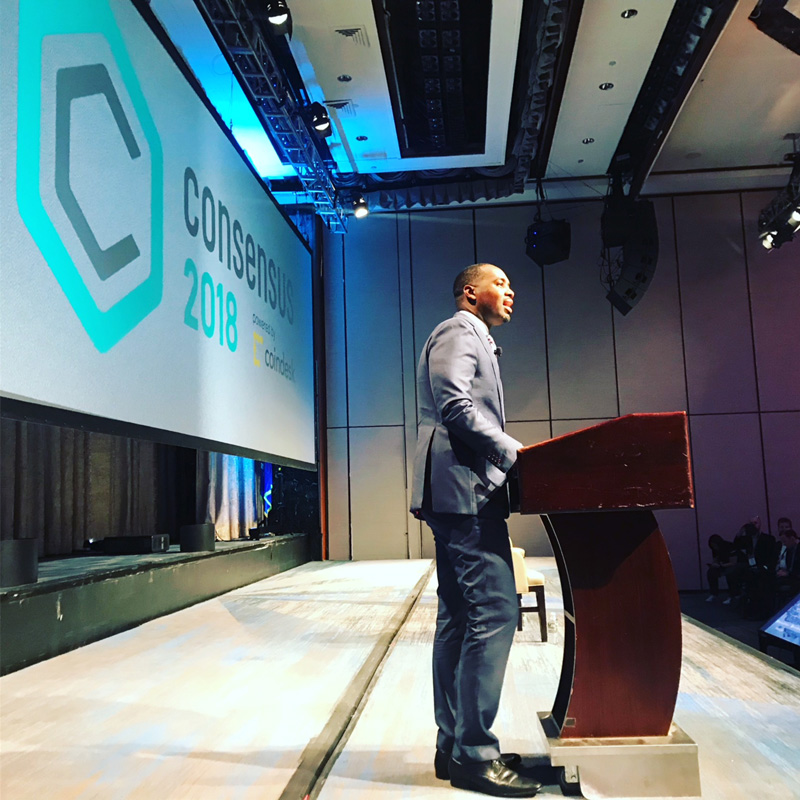 Consensus continues today, with the Premier slated for interviews with Nasdaq and Bloomberg Radio, among other media.

The Bermuda group will also visit the New York offices of law firm Norton Rose Fulbright to give a presentation on Bermuda’s economy and the island’s innovative approach to business over many decades.

Premier David Burt’s remarks made at the event:

Good morning ladies and gentlemen, I am delighted to be here with you today at Consensus 2018. There is a very real and intense buzz in the air as we each share, listen and learn how those around us are innovating with blockchain technology.

As mentioned in the introduction, I run a small country that is a 90-minute flight from New York City. Yes—I said 90 minutes—The drive to the airport is likely longer than the flight to the only place in the world with laws on the books to govern the issuance of Digital Assets.

Yes, that is right—I said the first place in the world – as Bermuda is to date the only country to actually enact laws that govern the issuance of Digital Asset tokens. There are a lot of countries that talk about what they are going to do; in Bermuda—we prefer to show, not tell. I will get to that a bit more later—and explain to you the reasons why Bermuda has been able to move so quickly.

Today’s panel will discuss regulation and you will hear from a Member of Congress here in the US and a Member of the European Parliament.

In order for countries to keep pace with technology, we must continuously update our legislative framework to adapt. This is a difficult balance for a small country like Bermuda, so it is a herculean challenge for the United States or the European Union.

Why? Because they are large countries with numerous layers or regulations, whether they at the national level, or sub-national level. You can get two different sets of rules, because what you may be looking to do may fall under federal or local jurisdiction, it may be the domain of the securities regulator, or maybe it’s the financial conduct regulator.

Though, in Bermuda, we may have our challenges, we’ve recently made quick progress to become a global hub for fintech enterprises and innovation.

We’ve been able to do this because Bermuda is unique. We have been successful in insurance because of our world-class regulator, the Bermuda Monetary Authority, and the link between the public and private sector in designing regulation that works.

So, within six months of starting our blockchain project, Bermuda is now leading the world in the regulation of digital assets. Let me give you a few examples on how we are leading:

I see a few familiar faces in the audience from the last place on the Crypto Circuit – Ethereal—so some of you already know that last Friday—May 11—in Bermuda’s Parliament, my government laid the Digital Asset Business Act 2018.

There is no other place worldwide that has introduced laws to provide certainty to the marketplace—only Bermuda has. At the same time, we will introduce a regulatory sandbox that will allow companies to innovate with cutting-edge fintech, while working closely with our regulator to bring these products to market so you can use the Bermuda platform to scale globally.

The Digital Asset Business Bill is the second piece of legislation Bermuda has introduced in the last month to provide much needed certainty for companies. The first, as I alluded to earlier, was the industry revolutionizing Initial Coin Offering Act which will provide regulatory certainty for token issuers and protection for customers who wish to participate in an initial coin offering.

Most importantly our legislation is broad enough to cover all types of Digital Asset tokens that may be issued. Whether they be a utility token, or a security token, Bermuda has rules in place to ensure that it can be done safely and lawfully from our shores.

In Bermuda, we do regulation very well. So, while there can be a lot of travel to conferences and people and countries talking about what may or may not be the case in the future, in Bermuda you have certainty, because we’ve done it.

Bermuda is that place where you can leave New York on Monday morning, arrive by noon, meet Government officials, regulators, and our high-quality service providers in the space of a day, have dinner on the beach in the evening, and be back at your desk in NYC by noon the next day.

But let’s be clear – if you are a bad actor or have a checkered past, don’t waste your time. Bermuda is not an easy jurisdiction to get into, as we have strict compliance controls to protect against money laundering and terrorist financing, and have extensive due diligence checks on sources of funds.

However, once you are in, and continue to abide by our rules, you will have access to the platform that we are building that will power the future. And you will have the seal of approval that notes you have passed the most stringent regulatory checks that exist anywhere in the world.

If you don’t follow our rules, our prison does have water views—but it is a prison!

Our approach is working, as companies are recognising Bermuda is a serious option. Recently, there has been a string of announcements of companies moving to, or setting up operations in, Bermuda.

Over the past three weeks, the Binance Group which is one of the world’s largest Digital Asset exchanges, announced plans to setup their global compliance base in Bermuda.

Medy-ci Ventures, a subsidiary of Overstock.com which was formed to incubate, launch, and invest in blockchain investments, announced they will be setting up operations in Bermuda and will use Bermuda as an Innovation Hub.

On Friday at Ethereal we announced that OmegaOne, a Consensys Mesh company, will be moving to Bermuda as we look to solve the Digital Asset custody problem. And there will be more announcements we will make over the coming days.

In closing, our vision is for Bermuda to be that well-regulated location for technologists and innovators who are building solutions that will power the economy of the future—a future where blockchain technology and the digitization of assets are part of everyday business.

There are some countries that have, innovation hubs and accelerators, but there is only one country where the entire island is an innovation hub to accelerate your innovation—Bermuda.

I hope that over the next few days, you visit our website fintech.bm or take the time to visit the Bermuda suite located downstairs in Concourse E so you can learn more about what we have to offer and experience the Bermuda difference by talking directly with our Government officials, our regulator, and our service providers in one place.

Thank you, and I look forward learning more, and hopefully welcoming you to Bermuda in the near future.