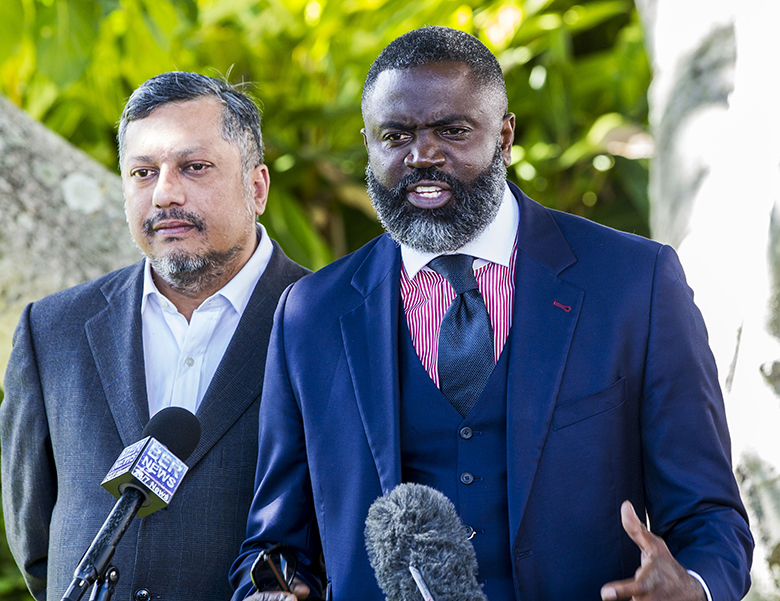 I rise today to share with the Honourable House about the Bermuda delegation’s recent experience at the Consensus 2018 Conference. This event was the lead event during Blockchain Week in New York City which concluded on May 16, 2018.

Mr. Speaker, now enjoying its 4th renewal, Consensus is the premier learning, networking and innovation event for blockchain in North America. With this year’s attendance topping 8,500 from a mere 400 at its launch in 2015, its explosive growth year-over-year mirrors the expansion of the unstoppable blockchain phenomenon. Attendees hailed from over 70 countries around the world and represented a broad diversity of the digital technology spectrum – from digital assets and exchanges, to hardware manufacturers, network and infrastructure specialists; developers, investors, lawyers, regulators and Governmental representatives. The conference took place in the heart of New York City’s midtown district and occupied four floors of meeting space, speaking halls, and multiple exhibitor showrooms.  The multi-day agenda addressed tech innovations, industry regulatory concerns, choosing the right legal team, as well as approaches to encourage diversity and inclusion in the sector.

Mr. Speaker, I would like to recognize the stellar work provided by the Bermuda Business Development Agency in organizing Bermuda’s attendance. They signed on as an event sponsor and negotiated direct marketing opportunities for conference delegates and a Bermuda suite which served as an invaluable hub for the 20-strong Bermuda delegation attracting hundreds of high growth start-ups, investors, and blockchain thought leaders over the three-day conference period.

Mr. Speaker, The Bermuda contingent led by my Premier and Minister of Finance, the Honourable E. David Burt, and supported by the Ministry of National Security, included representatives from the Bermuda Monetary Authority, the BDA and associated industries.  Law firms including CD&P, Trott & Duncan, Appleby, Smith-Bean, Walkers and Chancery Legal were invaluable assets to the delegation and were deluged with prospects over the three days.

Mr. Speaker, Bermuda has connected the dots. We have linked government leadership, regulatory and legislative strength, public-private sector partnerships with innovation, efficiency, and transformative thinking.  Mr. Speaker, based upon the feedback, and outcomes from Consensus 2018, we can confidently stake our claim as the jurisdictional home and future of fintech.

Mr. Speaker, Our Premier, the Hon E. David Burt, addressed a full auditorium of conference delegates on day one of Consenus 2018 and was met with an enthusiastic reception. His energetic presentation served as the introduction for a midday panel on regulation highlighting the island’s quick progress to become a global hub for fintech enterprises and innovation through ground-breaking legislation that will govern the regulation of digital asset service providers.

Mr. Speaker, The panel that followed included Representative David Schweikart of the US House of Representatives, and Eva Kaili, of the European Parliament. The discussion centred on the balancing act required of legislators, and governments, as we seek to balance protection of markets and national security with the nurturing of this unique emerging technology.  The Honourable Premier outlined the island’s commitment to innovation, welcoming quality players in the blockchain space and warned any potential bad actors that Bermuda would certainly be the wrong choice of jurisdiction, as our regulatory regime was built for entities with integrity and a commitment to compliance.

Mr. Speaker, Blockchain technologies are being touted as the “internet 3.0” by the tech cognoscenti.  2018 marks a greater visibility of this technology even by those not a part of the blockchain insider circles. The volume of blockchain media coverage has exploded.  Indeed coverage of Consensus 2018 extended beyond the trade outlets into mainstream media. What’s more, Mr. Speaker, Bermuda as a fintech jurisdiction, captured the attention of many of the top-tier outlets. Forbes, BBC Online, New York Times, Bloomberg and Nasdaq Radio joined trade publications, CoinDesk, and BitCoin Magazine in covering the Bermuda Fintech story.

Mr. Speaker, The Bermuda delegation demonstrated our extraordinary ability to multi-task and notwithstanding the dense agenda of the Consensus conference, and meeting schedules, our team readily accepted an invitation to the Manhattan office of global law firm, Norton Rose Fullbright. This law firm is ranked among the top five global law firms with more than 4,400 lawyers and 7,000 employees around the world. The Honourable Premier addressed an audience of over 100 attorneys, from practice groups across all sectors with additional offices connected via videoconference from Toronto, London, Munich, South Africa, Netherlands, Frankfurt, South Africa and the Middle East. We discussed the island’s economy and our proven approach to business and regulatory robustness, as well as our recent innovations in the digital assets space. Representatives from local Bermuda law firms, the Bermuda Monetary Authority and the BDA also participated.

Mr. Speaker, we were delighted to be able to announce a Memorandum of Understanding between the Bermuda Government and Shyft, a global blockchain-based network offering data protection for governments, industry and consumers. Under the agreement, Shyft will commit $10 million to create new jobs, help re-skill labour and invest in businesses, education and infrastructure for our island.  The collaboration extended to Bermuda’s private sector tech stars, with Shyft announcing on the same day that they will partner with local technology firm, Trunomi.  The premier declared that we, “the Government of Bermuda has decided to lead the way and build interoperability into legislation, in essence approach regulatory frameworks with exportability in mind.”

Mr. Speaker, the conference boasted over 250 speakers, panellists and presenters as well as an array of key figures in the blockchain space who came to network, negotiate and explore what was on offer and up for discussion at the event.

Our contingent met with a number of block chain leaders during the Summit including:

Mr. Speaker, while this new industry looks to become a major generator of revenue for our economy, I was heartened by the number of blockchain start-ups targeting positive social impact.  Indeed, I met Dr. Jane Thomason, an Australian Blockchain Social Impact Ambassador, who shared real-life examples of how this technology can change lives and communities for the better.  I learned of communities in the Pacific Islands which are benefitting today by using blockchain technology to create tuna traceability to combat illegal tuna fishing…tracking the fish from bait to plate. Tech Innovator, ConsenSys (not be confused with the conference name) was a key partner in developing this technology alongside the World Wildlife Fund. We are delighted to announce that as a result of our outreach, ConsenSys has solidified the Bermuda connection and have chosen to host a summit here in Bermuda next month.

Mr. Speaker, we are encouraged by this side of the blockchain ‘coin’ and have come away with the understanding that this technology has transformative powers beyond simple economics. It has the power to transform the world, to transform Bermuda, to transform lives.  With our initial legislation, and innovation-friendly environment, Bermuda is on target to be at the nexus of this, and I envision the island being home to technologies that may be used to positively change the world for our future.

I wish to thank the BDA and our industry stakeholders who attended, for their support of Bermuda and their dedicated work for the island during the conference, as well as their follow-up to come on valuable contacts made.