NEW YORK, May 14, 2018 (GLOBE NEWSWIRE) — Bermuda’s pioneering work to regulate the global blockchain industry was praised by delegates to one of the world’s largest cryptocurrency conferences, as New York celebrates “Blockchain Week.”

“It’s gratifying to go to an event like the one today, when people already know what’s going on in Bermuda,” said the Premier, who also sat down with BBC Online, Bitcoin Magazine, and Coindesk, a news site specialising in virtual currencies which also organises Consensus. “People we’ve met want to find out more about what we’re doing, how we’re moving forward. We certainly have a story to tell—and a very good one.”

The Premier addressed a full auditorium of attendees before a midday panel on regulation, highlighting the island’s quick progress to become a global hub for fintech enterprises and innovation through ground-breaking recent legislation to govern regulation of digital assets.

“The government of Bermuda—all the way up to the Premier himself—is showing remarkable leadership in the blockchain space,” keynote speaker, author, and Executive Director of the Blockchain Research Institute Don Tapscott said afterwards.

“Bermuda is attempting to figure out an environment that enables both an innovation economy and entrepreneurship, on the one hand, and protecting the interests of consumers and investors on the other. Our institute intends to collaborate much more closely with Bermuda in the future,” said Tapscott, a leading authority on the impact of technology on business and society.

Bermuda delegates were deluged throughout the day by inquiries on setting up businesses and launching initial coin offerings from the island. Meetings were held in a Bermuda suite, where a networking reception also attracted entrepreneurs and technologists looking to leverage the island’s respected regulatory environment and sophisticated infrastructure.

“It’s impressive to see the volume of people who have come through our meeting suite—since the speech, it has been non-stop,” said the BDA’s Head of Business Development Sean Moran. “I’ve talked to dozens of groups that want to launch their ICOs out of Bermuda, they want to establish service provider companies in Bermuda that would help support the growth of our digital asset industry. Everyone is excited by what they view to be a jurisdiction that would offer a positive and welcoming environment for new businesses in the blockchain space.”

Consensus continues tomorrow, with the Premier slated for interviews with Nasdaq and Bloomberg Radio, among other media. The Bermuda group will also visit the New York offices of law firm Norton Rose Fulbright to give a presentation on Bermuda’s economy and the island’s innovative approach to business over many decades.

MEDIA CONTACT:Rosemary JonesHead of Communications & Marketing rosemary@bda.bm 441 278-6558441 337-4696CONNECTING BUSINESSThe BDA encourages direct investment and helps companies start up, re-locate or expand their operations in our premier jurisdiction. An independent, public-private partnership, we connect you to industry professionals, regulatory officials, and key contacts in the Bermuda government to assist domicile decisions. Our goal? To make doing business here smooth and beneficial.

A photo accompanying this announcement is available at http://resource.globenewswire.com/Resource/Download/605ac6db-f2d0-4871-bbba-6d2f4b854494 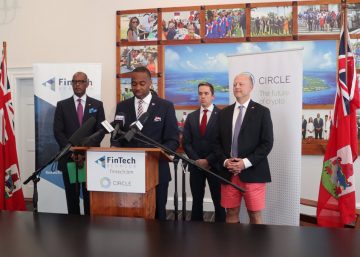